Has Crime in London Increased or Decreased during the Corona Pandemic -or Has It Just Been Redistributed?

According to statistics from the Metropolitan Police, comparing the rates in February 2020, prior to the commencement of the pandemic lockdown in the UK, and April 2020, London’s first full month in lockdown, overall crime rates decreased throughout all the London boroughs, as the above graph indicates.

In the period from February to April 2020, crime rates decreased across all London boroughs, and as the chart above shows, the decrease in overall reported crime is particularly visible in the London Borough of Westminster, a borough in Central London for which SRS provides many Security services. This decrease may be attributable to greater presence of police and security in Westminster which is the home of many governmental and political entities such as the House of Commons and the House of Lords. As or more likely is the fact that the Borough of Westminster has the most concentrated tourist traffic of all London boroughs, and as such, crime would naturally have dropped dramatically in the absence of tourism during lockdown.  The Borough of Camden, one of the several boroughs in which SRS provides Security services in North London, also showed a pronounced drop in crime, which again may be attributable to its draw for tourism, and the closure of the famous Camden Market, which usually results in a high concentration of people. The London Borough of Southwark, too, has many bustling markets as well as other tourist attractions, and follows this line of reasoning.

The following Boroughs have also shown shifts in crime statistics over the course of the pandemic:

Security North London: The London Borough of Islington, where SRS London’s security headquarters is located, has seen a drop in overall crime, but, as Islington and Camden’s Chief Superintendent Raj Kohli warned in April, there has been “an increase of businesses being broken into but also we have charged a number of people recently for breaking-in and stealing stuff from businesses.”  The London Borough of Barnet has also shown a marked decrease in overall crime in the months of lockdown.  The City of London, which is a magnet for security needs due to its concentration of financial institutions, seen a dramatic drop in crime in April 2020 when compared to February 2020.  The most commonly reported in the City of London were shoplifting, first, as well as anti-social behaviour, burglary and violence and sexual offences, though overall, crime was much reduced from February 2020

Security West London: in Richmond Upon Thames, which has historically shown a high concentration of residential security use, overall crime showed a drop of approximately one-third in overall crime per month from February 2020 to April 2020, with anti-social behaviour far topping the specific crimes list in April.

Security South West London: Looking south of the Thames, in the  London borough of Wandsworth and Battersea, the overall number of crimes have shown a decrease from February to April 2020, this decrease is also consistent with an overall reduction in commercial activities in the area.

More generally, according to the National Police Chiefs’ Council (NPCC), overall crime statistics in England and Wales fell by 28% in the four weeks to 12 April, compared to the same time period in 2019. In particular, home burglary was down by more than a third in London, which can almost certainly be attributed to people spending far more time indoors. According to Martin Hewitt, chair of the NPCC, the significant drop in crimes was closely associated with the fact that, due to the lockdown, pubs, bars and most shops were closed and people were staying at home.  However, incidents of anti-social behaviour rose by 59%. The increase was likely to be linked to breaches of lockdown measures, with more than 3,200 fines issued in England, the NPCC said.

Statistics breaking down crime types further bolster the idea of lockdown as a redistribution of crime in London. For instance, crimes categorised as Violence Against a Person increased from 25.54% of total registered crimes in February 2020 to 36.94% of total registered crimes in London in April 2020. During the same period, crimes of Theft showed a significant decrease, with Theft making up 29.52% of total crimes reported in London in February 2020, compared to 17.58% in April 2020.  These figures may be attributed to people being required to shelter at home, making theft of residential properties less desirable and less likely. Equally it may be that the increased pressure and anxiety associated with job insecurity increases violent tendencies in domestic situations. 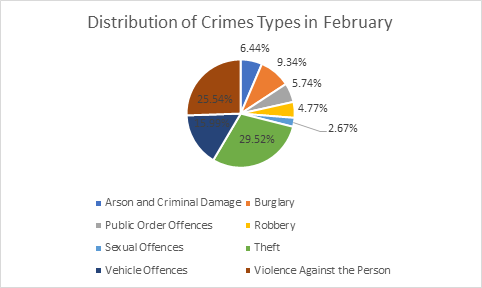 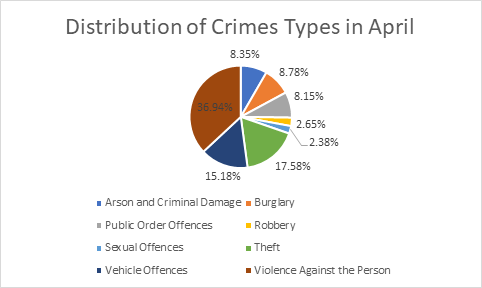 How the crime statistics will shift as pandemic restrictions ease throughout London, and once the UK begins to open back up to tourism, remains to be seen, but with people beginning to spend more time away from their homes, and with the London bustle beginning to come back to life, it is likely to assume that crime will be redistributed differently once again.

Yair Daren (Bsc), Yair Daren is Director of Security Risk Specialists Ltd, a London Based Security company, a former IDF Lieutenant and an Economics and Social Policy graduate of the University of London.

What parameters should be considered when choosing a Security Company in London?