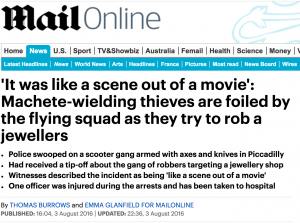 MailOnline: ‘It was like a scene out of a movie’: Machete-wielding thieves are foiled by the flying squad as they try to rob a jewellers

Machete-wielding thieves were dramatically stopped by plain-clothed police officers as they tried to rob a luxury jewellery shop in the capital today in ‘scenes straight out of a movie’.

The gang, riding two mopeds, were ready to pounce in Piccadilly in central London at around 11.25am when officers from Scotland Yard’s anti-robbery Flying Squad took them out.