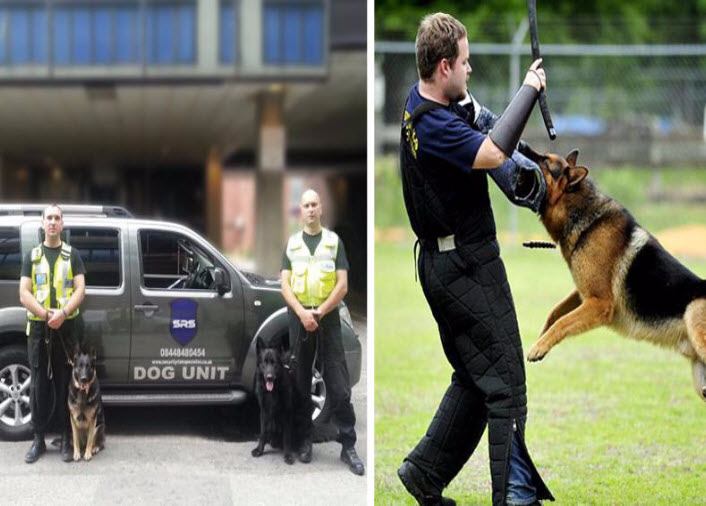 specifically security  dogs – can have an extremely positive effect – as long as both the dogs and handlers are professionally trained. Some research suggests that a security dog with their handler is the equivalent in security terms to four security guards.  Where guards don’t offer a sufficient deterrent security dogs are an extremely efficient deterrent in warding off squatters and preventing all kinds of anti-social behaviour. We have first hand experience of the impact a dog and handler can have on squatters attempting to return to a site from which they were evicted and the process would not have been as straightforward without the presence of the security dogs and handlers. Security dogs are highly beneficial when used to provide security for a variety of sites – in particular large sites such as empty buildings and construction sites. They have been shown to  reduce crime when used for residential security and neighbourhoods feel much safer when protected by dogs and handlers.  They are also incredibly effective in controlling a crowd and can be a crucial component of event security.

All our security dog handlers are professionals and the dogs they work with are highly trained and vetted, licensed and insured.  Both undergo continuous training to maintain the highest standards. Our dogs behave in a well mannered and obedient way, only behaving aggressively when commanded to do so or when a threat is posed.  Our dogs are trained to be incredibly obedient – to stay under control in crowded environments and to ignore all distractions. They are trained to confront intruders including those armed with weapons– to release and stop on command.

For those looking for effective security, security  dogs are certainly ‘Man’s best friend’ but it’s a different story for those standing on the wrong side of the fence.